April 22, 2021 – Today we’re excited to announce preliminary results from Bolster’s Board Benchmarking survey, our analysis of 250 private company boards. Through our research, we have uncovered demographic and compensation details of 650+ board directors and created a suggested set of action items that CEOs and board leaders can take to #flipthescript on board diversity.

Our most surprising finding is that only one-third of private company boards have independent directors today.

In other words: Two-thirds of private companies have only investors and management directors on their boards, limiting their capacity for outside perspectives at the most senior level. While it’s no secret that diverse teams build better businesses, our research indicates that board diversification is still not taking place broadly among private companies.

In fact, we found that early stage companies are less likely to have diverse boards than later stage companies. More than 60% of boards without either racial or gender diversity in our study occurred at the Series A stage and earlier. It also appears that some CEOs are leveraging independent director seats to add diversity: We found that women are three times as likely to hold independent director seats (compared to management or investor seats).

By contributing data to the overall conversation about board diversity, we hope to demystify information about private company boards, provide objective benchmarks, and offer an actionable set of takeaways for CEOs and board leaders.

To participate in the study and receive a more in-depth look at our results (including a look at our compensation comparisons among independent directors), sign up as a Bolster client here and complete your Board Benchmark survey.

By the Numbers: A Case for Independent Directors

We found that only 32% of private company boards have at least one independent director, but 51% of CEOs intend to fill an independent director position in the next 12 months. While the current trends show that independents aren’t typically added to board until the Series C stage, this gap of unfilled seats today points to a potential opportunity for CEOs to leverage independents earlier to ultimately diversify their boards. 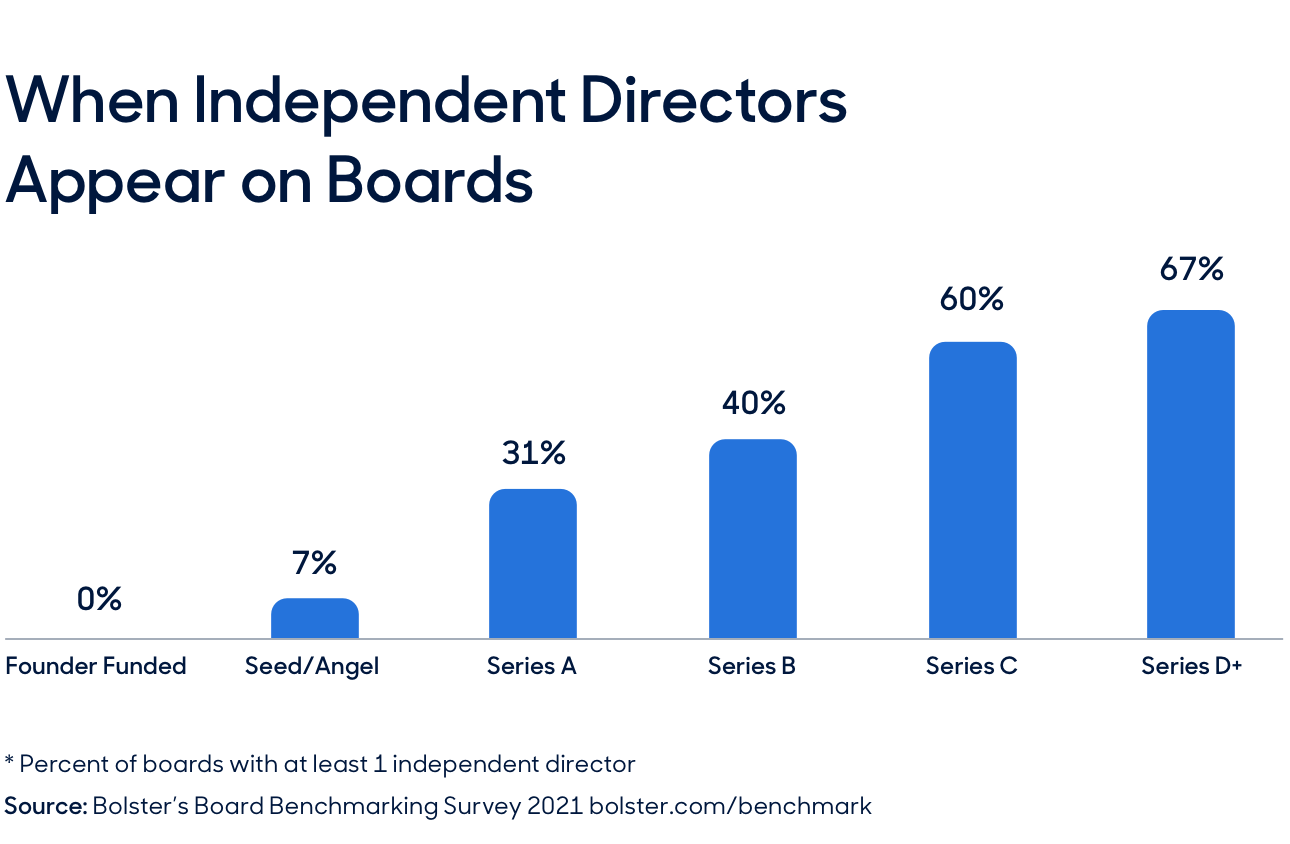 Nearly 60% of boards have either 2+ management directors or 2+ investor directors. In both cases, CEOs are potentially duplicating board members with shared viewpoints, rather than introducing diverse perspectives. Notably, 45% of boards currently have an even number of directors, making it impossible for anyone to have a tie-breaking vote. Depending on the state that chartered your company, an odd number of directors might even be a legal requirement. 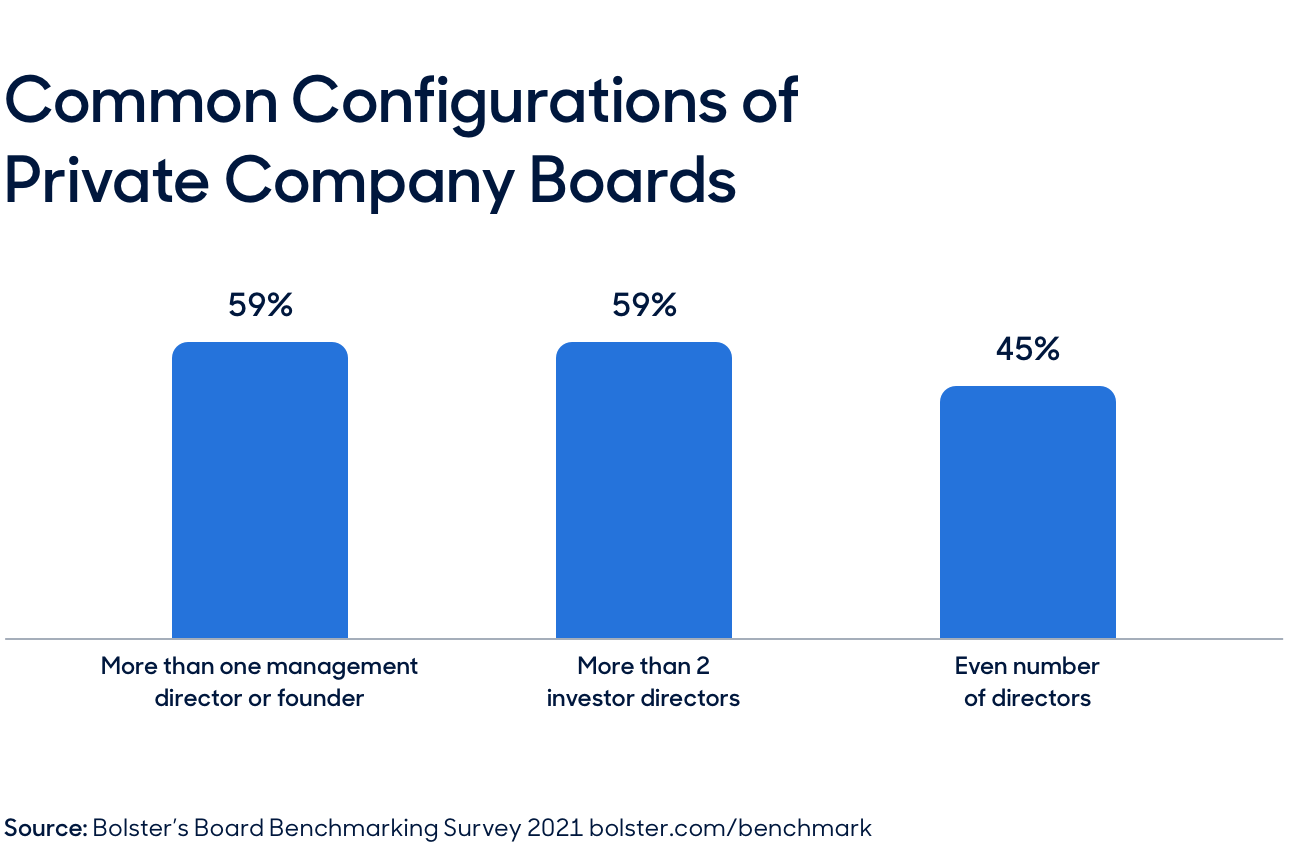 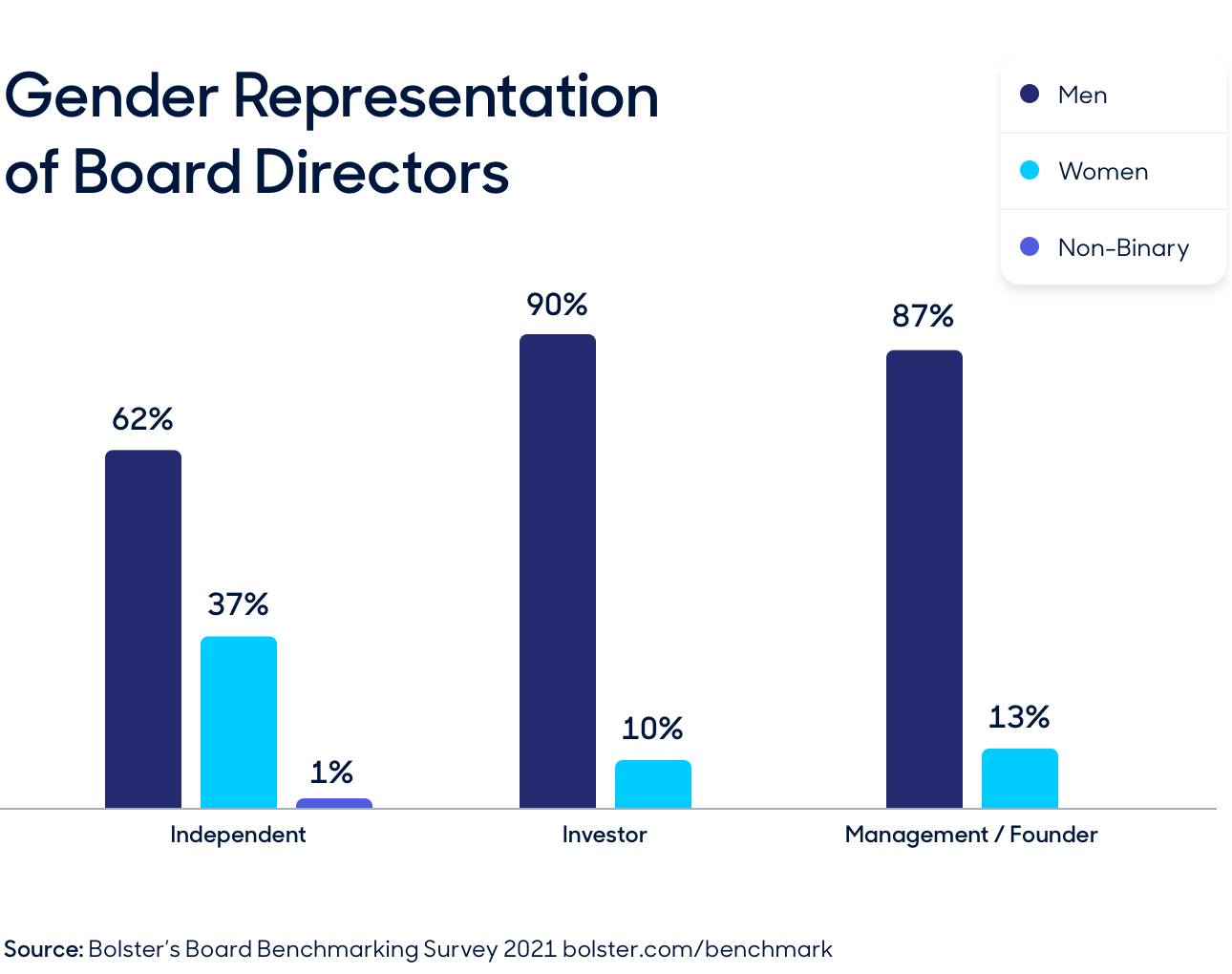 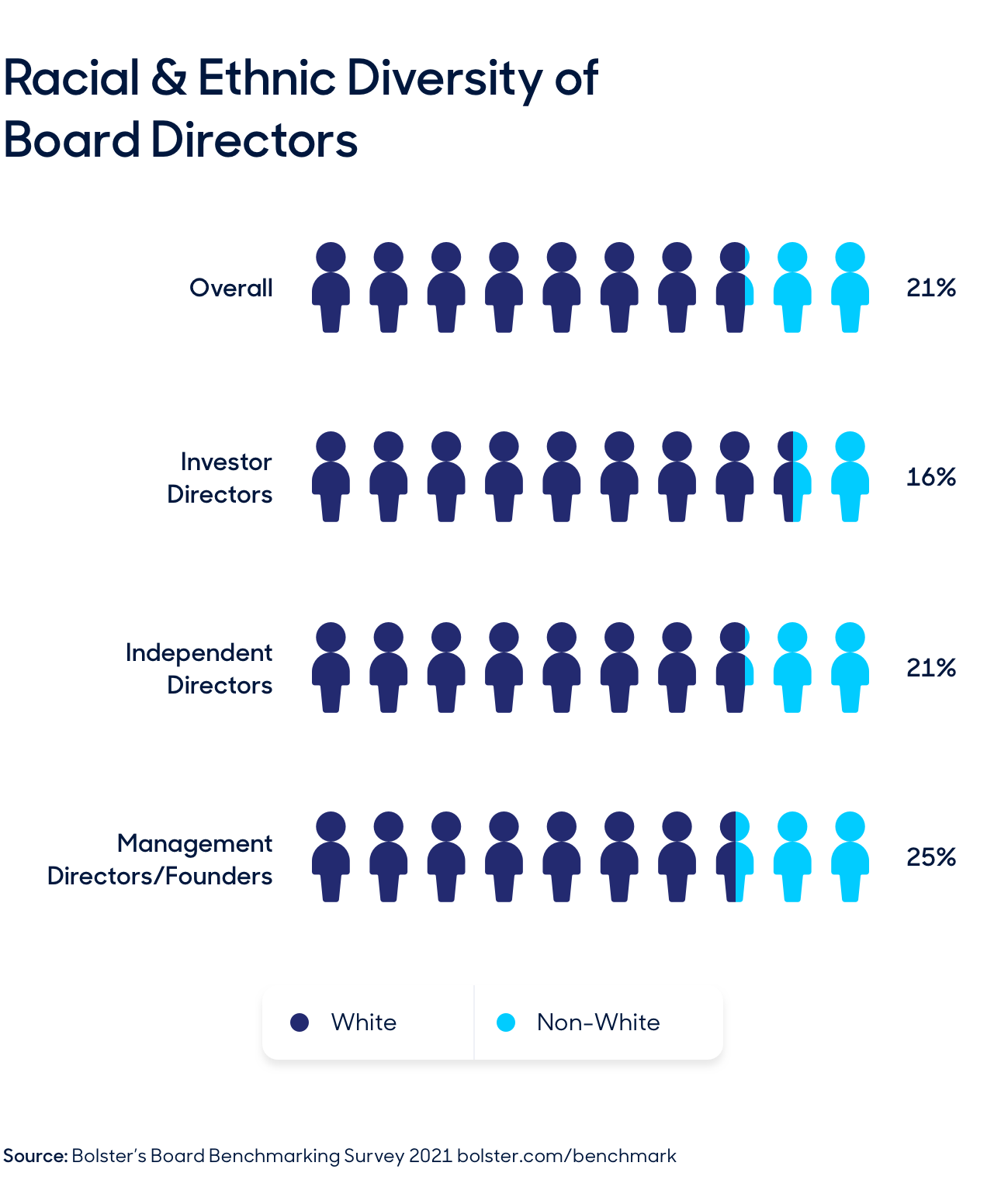 CEOs and COOs are the most common background among independent directors

Of the independent directors in this study, 40% are current or former CEOs and 20% are current or former COOs, with CFO and CMO also noted as desirable backgrounds. This aligns with the three dozen board searches we have conducted since Bolster’s launch in September 2020, where the preferred background included: past CEOs, go-to-market leaders (CMO, CRO, CCO), CISO, Product or Product Marketing leaders, people with experience in partnerships/strategy, or COOs and CFOs. But take note: Given that inequities exist among individuals who obtain this level of job experience, these race and gender disparities may in turn be perpetuated in board membership.

Two-thirds of CEOs are open to bringing on first-time directors to their boards
CEOs are increasingly looking to recruit members from traditionally underrepresented populations to their board. They are also open to a broader range of candidates: Of board searches in our network, 89% of CEOs were specifically looking to add diversity, and two-thirds of CEOs indicated they are open to bringing first-time directors. 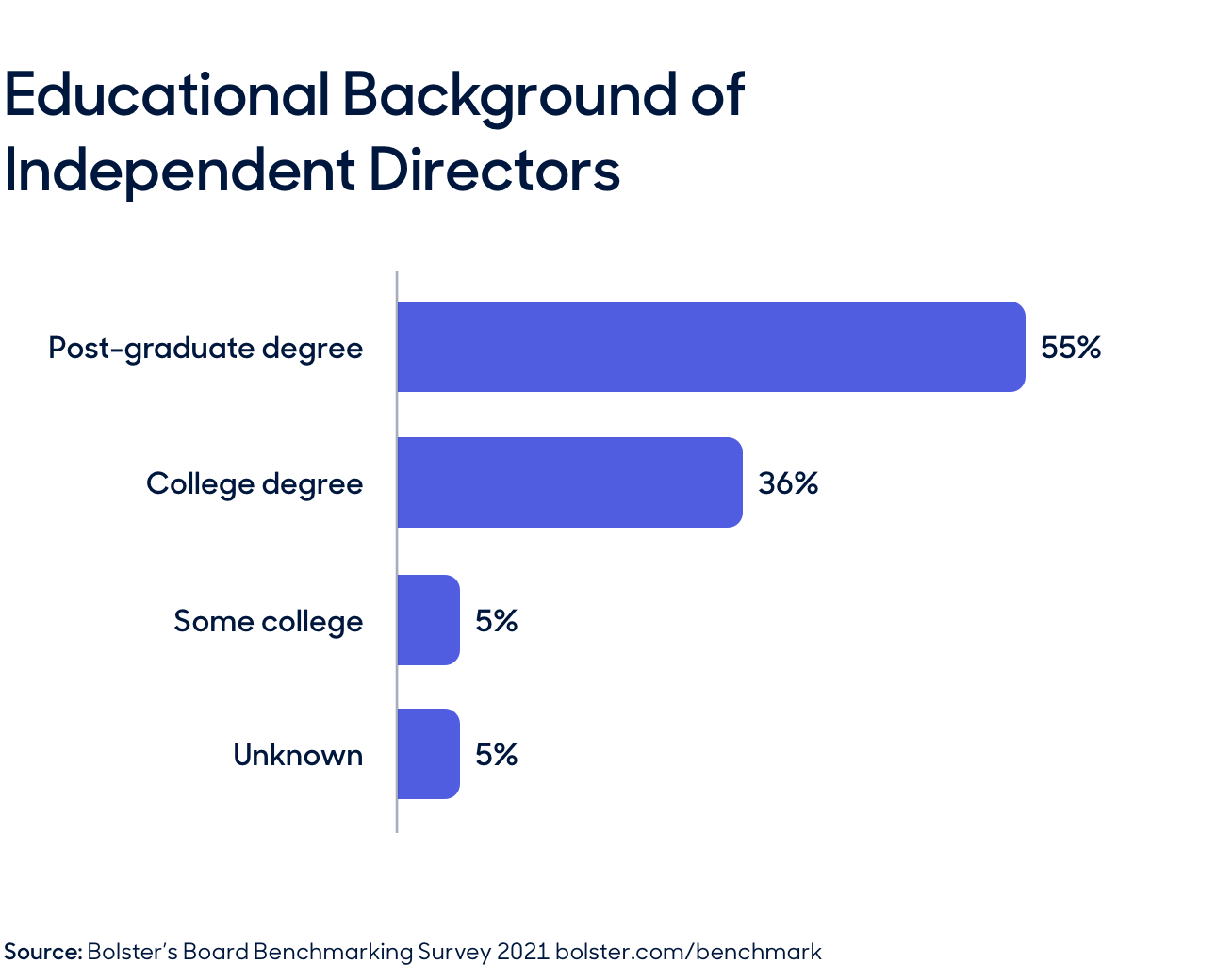 Equity compensation is unequally distributed among independent directors
Of the independent directors we profiled we noticed that men seem to have a slightly higher average earning potential (measured in basis points per year and grant value) compared to women directors at like companies. While the data set that drives this observation is too small to be statistically significant, we thought it was important to surface this point now, and we will be keeping a close eye on it as the data set grows. One of our goals in publishing this study is to provide CEOs with better compensation benchmarks for board directors in order to help them remove any pay gaps or disparities among board directors.

A Peek Under the Hood: Diversity & Composition of Private Company Boards

Notably, only 12% of boards in our study had more than one woman on the board. Of boards with at least one woman director, this individual was the founder 49% of the time. 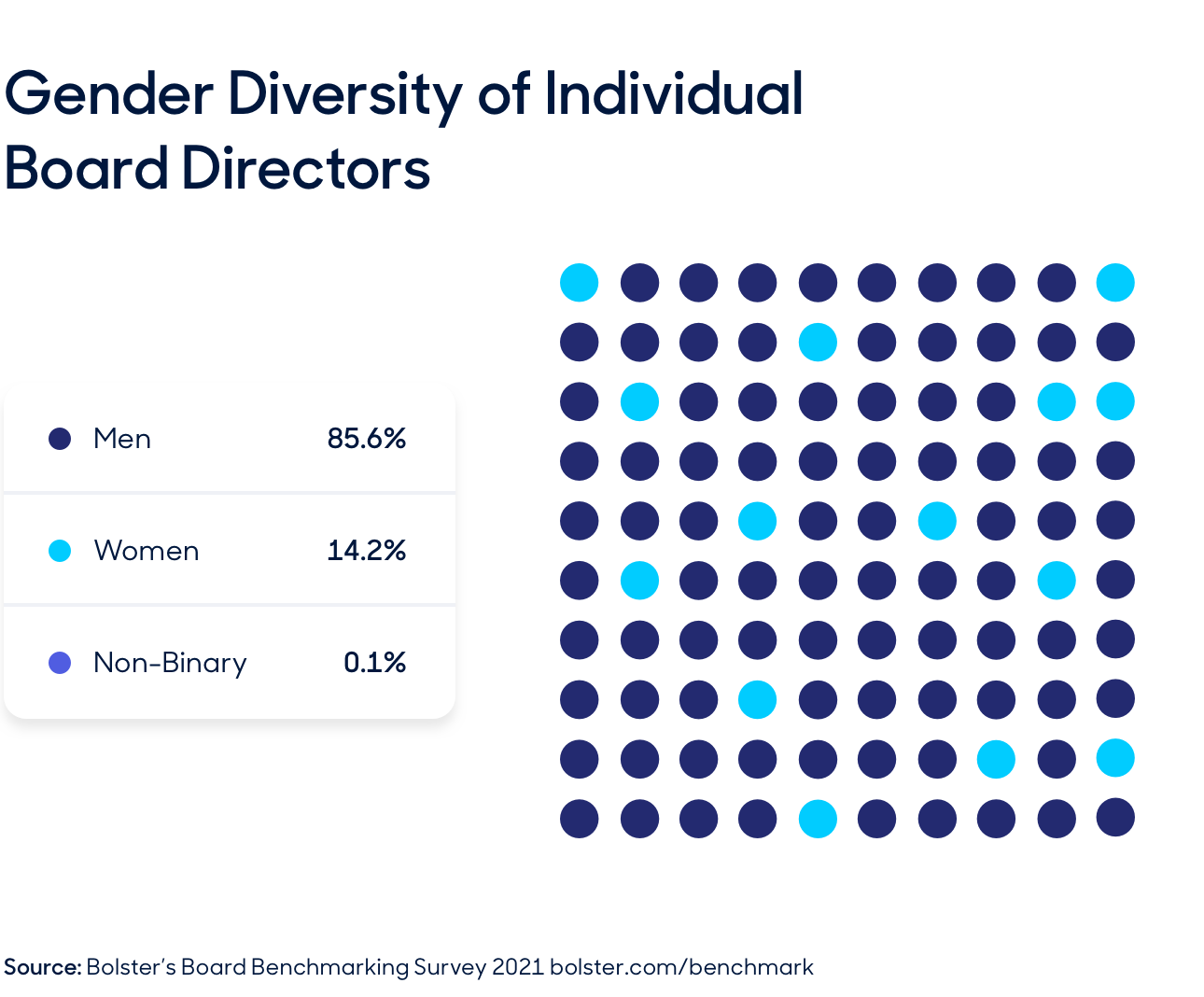 Private company boards are by and large, racially homogenous

Of the private company boards profiled in our study, we found that 79% of seats are held by people who are White. 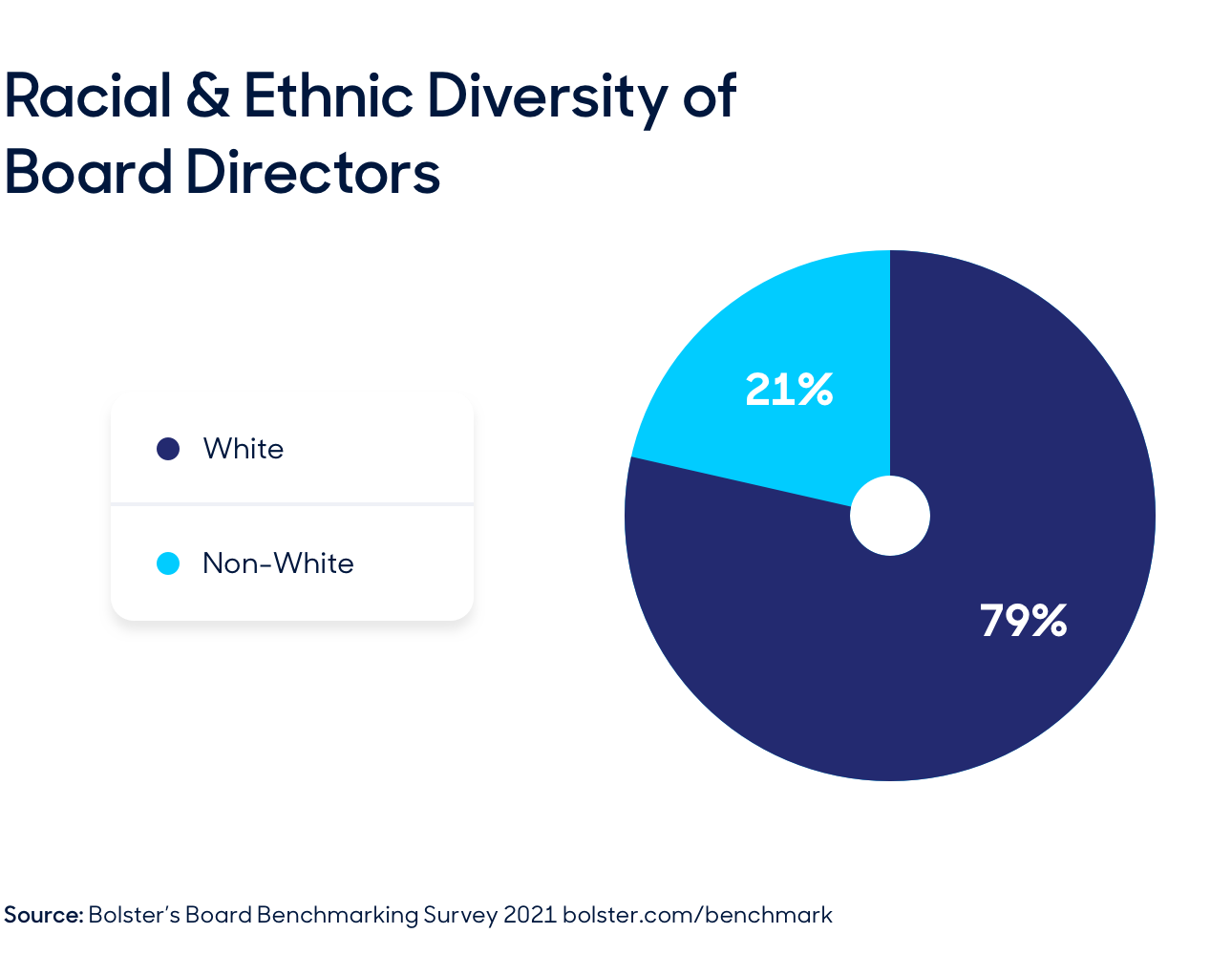 Many boards in our study were completely homogenous. When it comes to racial and ethnic diversity, 43% of companies have boards made up of directors from the same race or ethnicity. (This included primarily all-White boards but also two boards with all-Asian directors.) 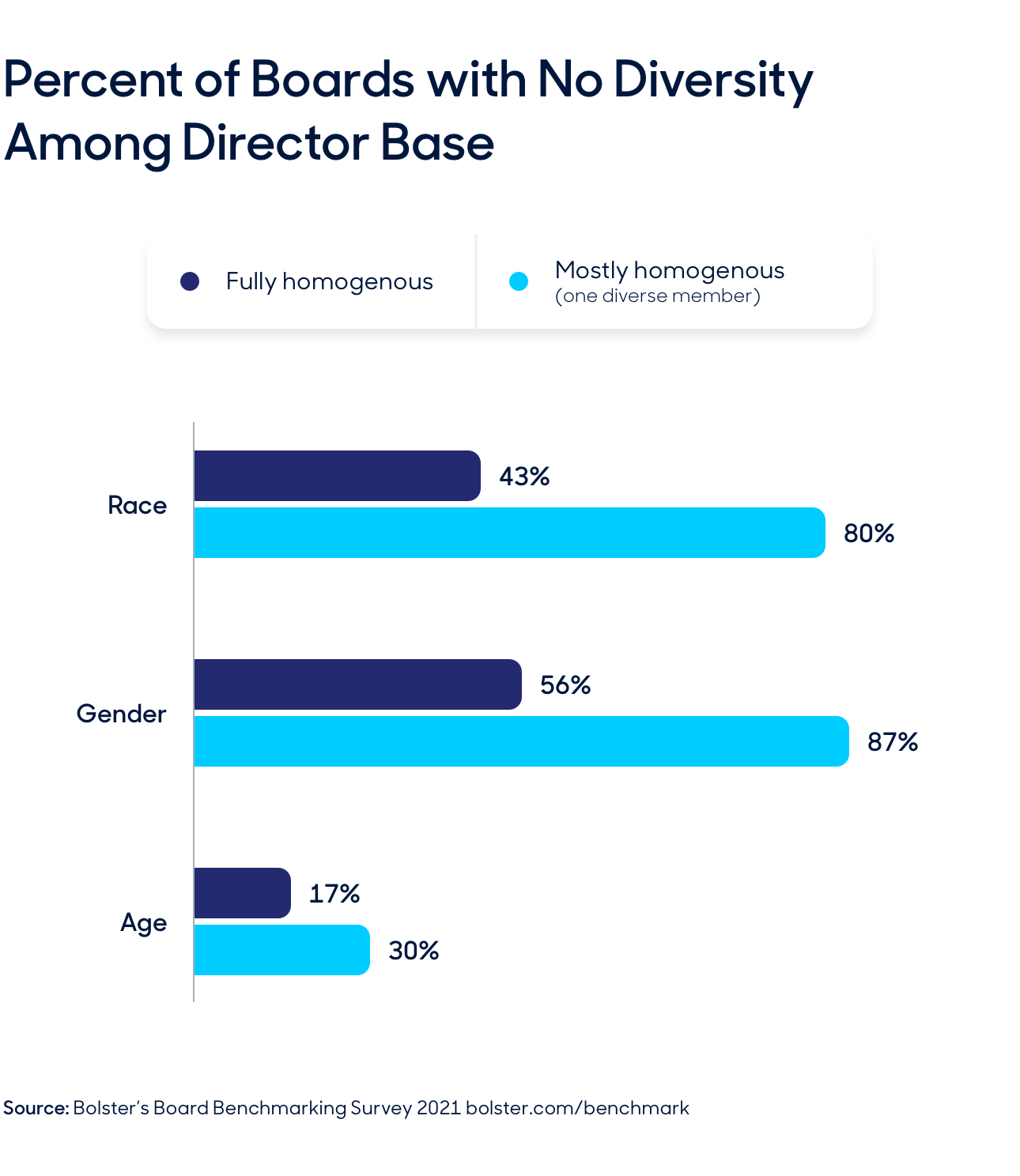 Of the subset of Non-White board directors, 60% identified as Asian. When compared with population data in the U.S., the biggest representation disparity occurred among Black and Latinx individuals. Latinx and Black directors in our study each represented only 2% of the total sample set of directors surveyed, compared with U.S. population estimates of 19% and 13% respectively. 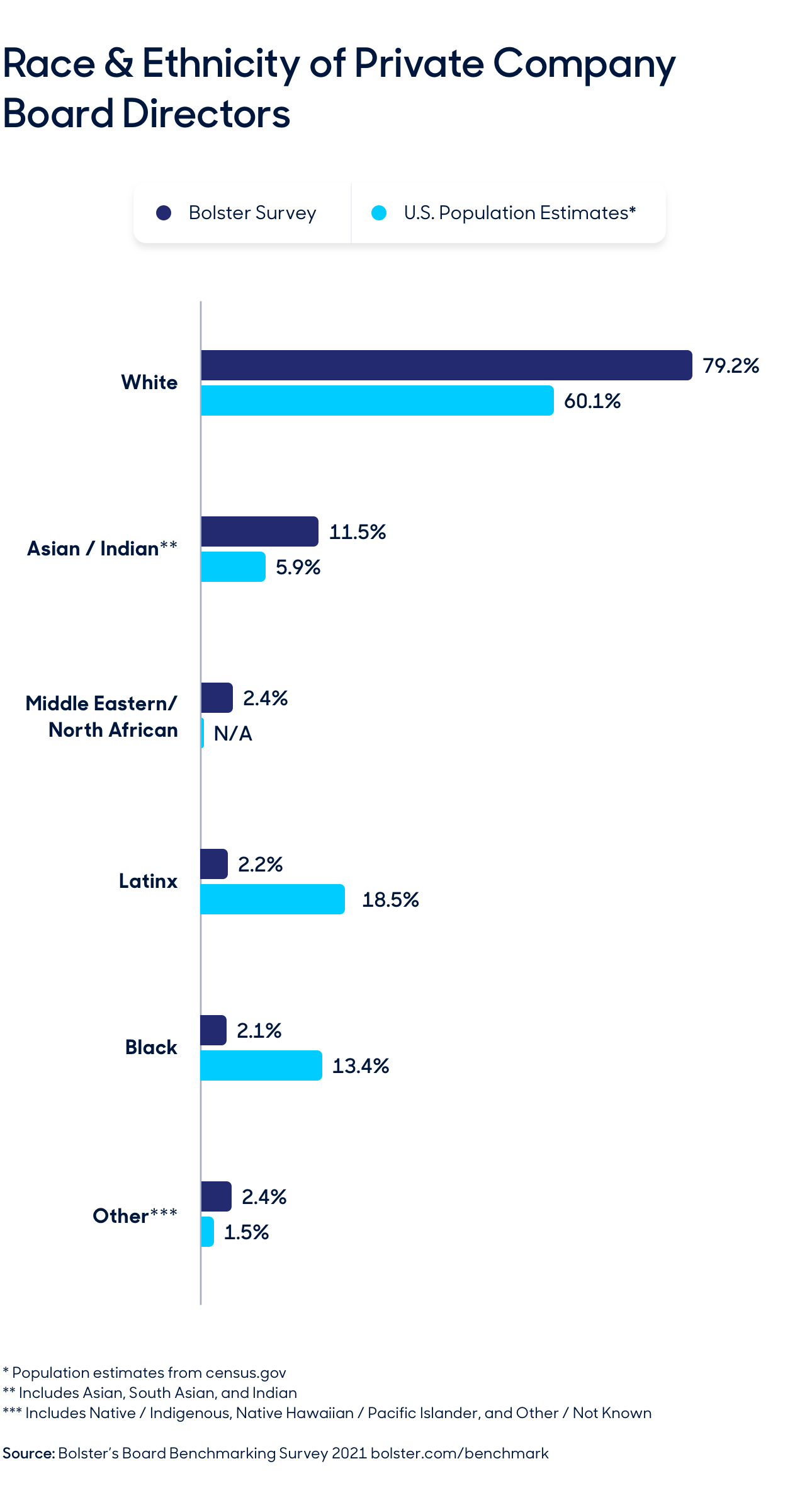 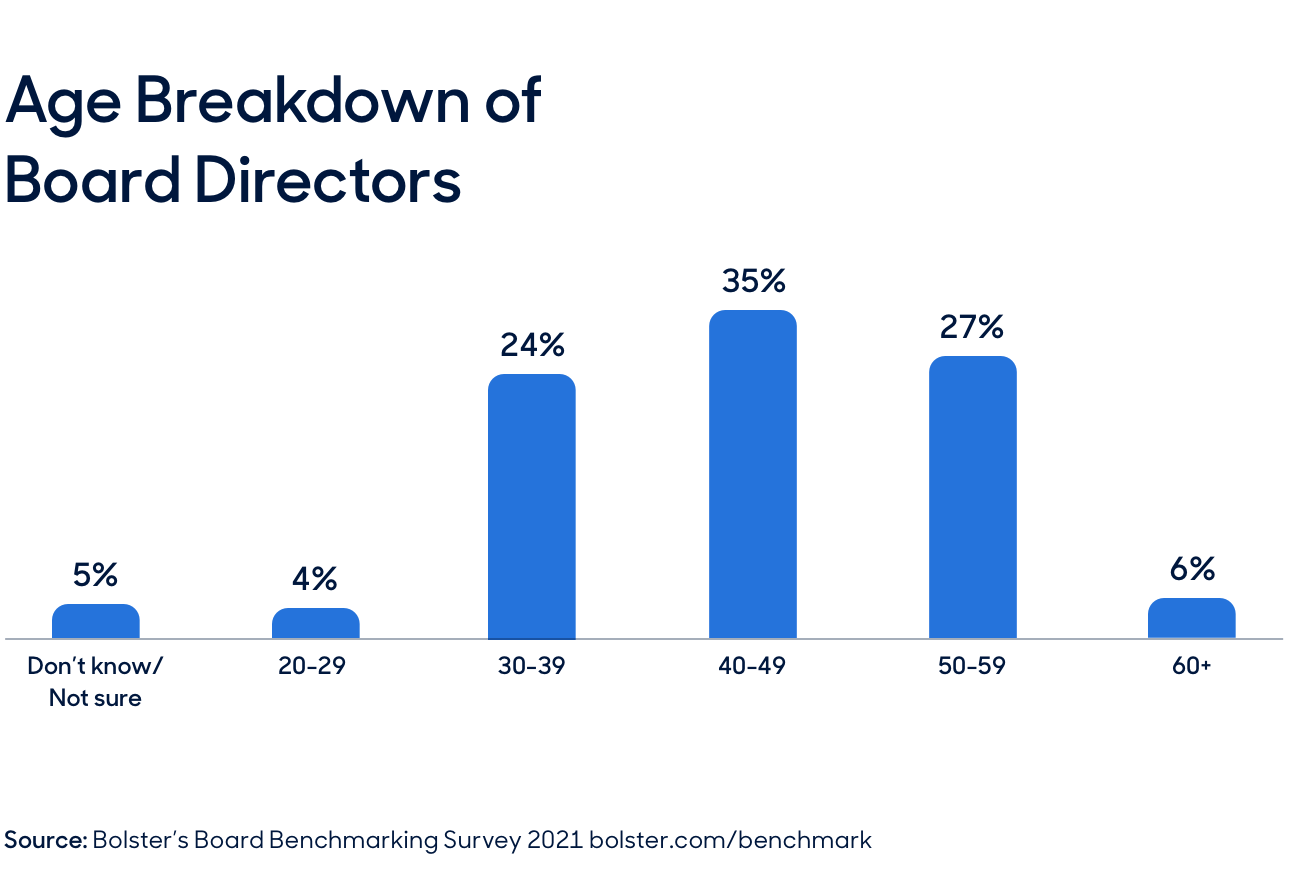 Key takeaways for CEOs and board leaders:

In partnership with several diversity, equity, and inclusion specialists at the corporate level, including the team at Just Work and Strata RMK, we have identified five actionable ways that CEOs and board leaders can #flipthescript on board diversity.

For more advice and practical, actionable ways CEOs and board leaders can foster inclusive and fair environments in and out of the board room, read more about Just Work’s framework here.

A more detailed, interactive view of these results (which includes a look at board compensation) is available at no charge to any CEO who creates a Bolster account and shares data from their own board. We encourage you to create a Bolster account and participate in this important study here.

We are building the most comprehensive data set around private company boards. The information captured has been reported directly from CEOs. It also exposes for the first time what boards look like even at the most nascent stages – more than 50% of responses come from companies at a Series A stage or earlier.

This survey will remain open as a real-time benchmarking application on Bolster’s platform for startup and scaleup CEOs, including an aggregated look at cash and/or equity compensation and vesting details for private company board directors.

This data, effective March 17, 2021, was gathered first-hand from CEOs or other executives from 250 private companies from more than 250 venture capital firms in Bolster’s data set. There was no fee to participate. The distribution of companies based on stage was: Founder Funded (2%), Seed/Angel (34%), Series A (23%), Series B (15%), Series C (15%), and Series D+ (12%). While the majority of respondents are from U.S.-based companies, we did have some international companies in the data set. The largest geographic markets represented in this study included California, New York, the midwest (including Indiana, Colorado, and Illinois), and international markets. While the companies in this study spanned across 30 industries, the largest industries represented included SaaS, Computer Software and IT services.

We’d like to thank our Accelerator and VC partners that played an important role in encouraging CEOs to participate in this study. Firms that had a critical mass of portfolio companies completing the survey include: Bonfire Ventures, Costanoa, Foundry Group, High Alpha, Matchstick Ventures, Redpoint, Sequoia, Techstars, True Ventures, Uncork, and Union Square Ventures.

If you have any questions about this work, please contact Bethany Crystal at bethany.crystal@bolster.com.