How to Evaluate Your Board

Do you evaluate the performance of your board? If not, you should! A lot of CEOs think it’s pointless to give board members any feedback, but failure to do so is just as big a miss as failure to give your staff feedback or failing to ask your staff for feedback. How else are they going to understand where they’re serving you and the company well and where they’re not? A lot of CEOs are reluctant to give board members feedback. The board may be your boss, but remember that (more often than not), you’re the leader of the board.

Running a board feedback process need not be lengthy or cumbersome. If a board is healthy, it doesn’t even have to be run all that often. There’s nothing magic about an annual process. It could easily be every 6 or 8 or even 12 quarters.

I developed a survey years ago built on the work of the legendary, late Bill Campbell (with Bill’s permission to do so and to distribute it). Bolster will be releasing this survey as part of our CEO tool set in 2021 as a nice complement to the Board Benchmark application we just launched this fall. I won’t give away too much of it here, but the idea is to do two things – first, have all board members evaluate the functioning of the board as a whole; second, have all board members give feedback on individual board member performance to all other board members (more of a 360).

I’ve run this kind of process a few times over the years on my own board to great effect. At least one time, it became clear that we had an underperforming board member – and that while every board member knew it, no one was willing to speak up about it. The survey data empowered me to have the tough conversation and move that person off the board. A second time, the survey results just made it clear to me that I wasn’t doing a good enough job engaging the board on some key topics, which caused me to rethink my whole board operating system and drive some positive change there.

The report-out and ensuing discussion also don’t have to be particularly formal or difficult. I just include our survey’s results, with my commentary, as part of our executive session materials for the following board meeting and I moderate a discussion of the results and commentary at the meeting’s executive session. If I had a major problem or disconnect in the survey results, I might handle it differently. For example, I might have the conversation facilitated by another director or by an outside facilitator or coach.

The sections of the full board survey (each of which has 3-5 specific questions in it) are:

The sections of the director-specific survey (each of which has 3-5 specific questions in it) are:

I am going to redesign the surveys before we productize them in the Bolster platform to include some or all of these two wonderful frameworks from Startup Boards that Brad Feld and Mahendra Ramsinghani created. I showed them in two prior posts here and here in this series but they’re good enough to show again here. This first one is one I’ll add into the full board survey: 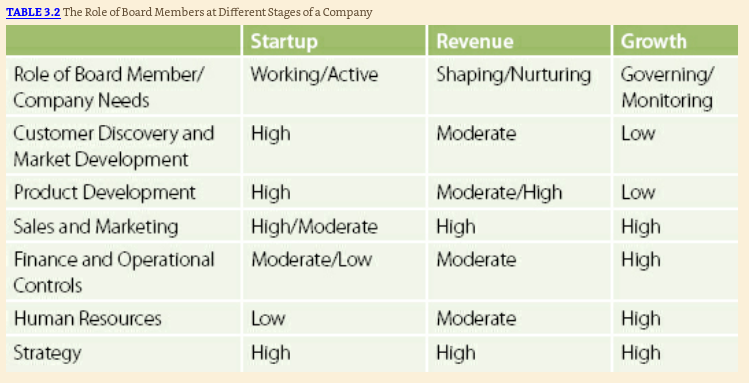 And this second one is more for the director-specific feedback:

The one thing I’ve never done with a board feedback process is ask members of my executive team to evaluate the board. That would be even more of a 360. Quite frankly, it’s a good idea that I’ll incorporate in the future.

In an earlier post I said that everybody needs to be accountable to someone, and the board does that for the CEO. The corollary to that is that everyone needs measured feedback on their performance or contribution to the company’s goals. A well thought-out survey can provide valuable information for you and your board and do that in an objective way. So, don’t avoid evaluating your board, embrace it!